Do you have many contacts, among the lumberjacks?

特情招待费——哈尔滨市公安局报销的一张发票（1956年）
(click on the title to view the document) 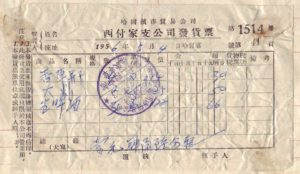 A frustrated professor in the Department of Government at Harvard recently compared the younger generation of PRC historians in the West to intoxicated janitors rummaging about in the dustbins of grassroots society. Instead of engaging, as she felt they ought to, seriously with the big questions posed but left unanswered by her own generation of social scientists – questions exploring “the ‘commanding heights’ of the Chinese state and its policies” – they often seemed oddly content to just collect and examine residues of everyday life! What a waste!

OK, so it appears to me, perhaps mistakenly, as if Harvard in general has a bit of a problem with janitors. Serious comedians have implied that the university rates very poorly the work performed by the women and men who empty garbage cans, and clean sinks, toilets, urinals, and floors. Be that as it may. But I do feel strongly that we must come to terms with the fact that – as William “Will” Hunting could have said, had he not been at MIT, and Eric Hobsbawm actually did say – “every generation asks its particular new questions about the past. And they will go on doing so.” The agenda of questions that attracted social scientists to the professional study of China a generation or two ago is already itself history, so let us please refrain from urging today’s graduate students and assistant professors to “revisit” it as if it were something else!

On this note, I present the latest Document of the Month. I have picked it in less than total seriousness in order to deliver a sliver of everyday life that is as absent from past social science scholarship on PRC politics as are Donald Rumsfeld’s famously “unknown unknowns.” Removed from its historical context, this is pocket litter: a sixty year old receipt for 1.46 yuan from a store in Harbin, for vanilla sugar cookies, shrimp (?), and draft beer. But, in its now salvaged formerly flea-market state and supplemented and corroborated by other sources, it happens to be the only record around that tells us how much an urban Bureau of Public Security was prepared to spend to reward one of its most trusted agents (in this case, an informer in the local Muslim community) for a job well done, on top of the regular allowance that the agent received each month. You never asked yourself that question, you say? You’re more interested in whether Mao Zedong was “authoritarian” or “totalitarian”? Please… 😊