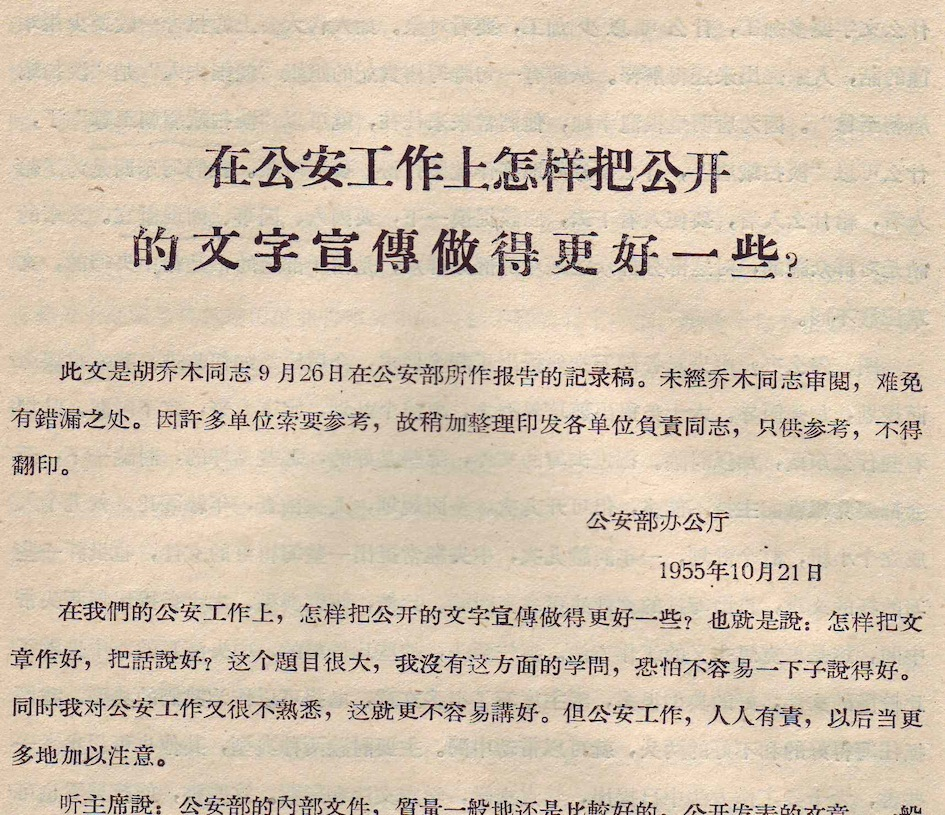 It’s that time of the year again. After a summer in the archives or doing in China what Clifford Geertz once called “deep hanging out,” we return to our home danweis and the Real Work.  I am myself teaching a master’s level course this term, on Politically Correct Chinese (PCC). I’m still tweaking the syllabus, but intend to put a comparative spin on it. Much of what the CCP has sought to do with PCC over the years is, after all, not that different from what our own politicians and opinion leaders are attempting. Sell us their good ideas. Rationalize their obvious failures. Topping my list of extra-Sinological gray-cover course readings on this subject is The Israel Project’s Global Language Dictionary, from 2009, and its discussion of “words that work.”

Which brings me to the Document of the Month below, a September 1955 talk by the CCP’s great spinmeister Hu Qiaomu to officers in the Central Ministry of Public Security. In it, Hu explains to his audience how they might want to go about influencing the Chinese public’s view of law enforcement in a more positive direction. How to improve the optics or reframe the narrative, as one hears people say these days, in order to reshape “perception” of the police. Under the title “As Part of Our Public Security Work, How Can We Improve Our Open Text-Centered Propaganda?,” a stenographic record of Hu’s words was distributed to public security officers and I have here copied it from an untitled early collection that also includes a transcript of the classic 1958 text 《胡乔木同志在写文件方法座谈会上的讲话》. Hu deals with a wide range of issues, including how to reconcile what members of the public may see with their own eyes with what the government knows about the full facts on the ground and the broader picture. One plan I have for a comparativist seminar on political correctness and language would involve reading Hu’s talk together with a recent opinion piece or two from The Police Chief: The Professional Voice of Law Enforcement on how to correct Afro-American community misperceptions of law enforcement. Then again, it might just prove to be painfully confusing. . .