《公安建设》转载安徽省公安厅《关于宿县警卫工作的调查报告》
(click on the title to view the document) 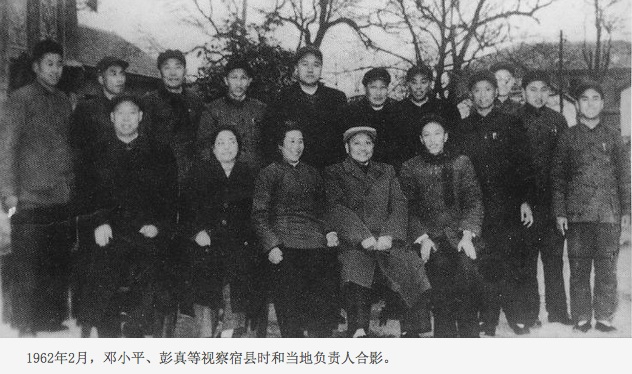 The term “Potemkin Village” has been used since the days of Empress Catherine II of Russia to describe “a hollow or false construct, physical or figurative, meant to hide an undesirable or potentially damaging situation.” Its post-modern European equivalent is the G8 “Fermanagh Facelift,” an expression that has yet to catch on, but surely deserves to be included in any new and expanded edition of the Dictionary of Words that Don’t Exist but Ought to. In the PRC, Fermanagh Facelifts – socio-cosmetic operations mounted solely for the purpose of making visiting dignitaries perceive a community to be more thriving than it actually is – have a long pedigree and include the remarkable Deng Xiaoping delegation deception undertaken by officials in Su county, Anhui, on 25 February 1960. You are a biographer of Deng’s and you have never heard of it you say? Well, that just proves my point from last month here on the Document of the Month website, namely that the serial Public Security Construction is a sadly neglected “must-read” for students of PRC history.

As reprinted on 7 July 1962 in No. 488 of Public Security Construction, the 1961 investigation 安徽省公安厅《关于宿县警卫工作的调查报告》 contains, for now, all the information that historians have about what transpired. The Anhui government’s official website merely reproduces a few grainy photographs from what must have been but one of many similar fact-finding missions. The official 《邓小平年谱》notes nothing more than that the CCP General Secretary’s party “left Bangbu before lunch on the 25th [of February 1960] and arrived in Su county where they visited the March 8 [IWD] People’s Commune and Shuangduiji ruins from the Huaihai battle, before travelling on to Ji’nan that evening.” That is all. But what the findings leaked in our Document of the Month show is that the entire visit, from start to finish, had been a carefully choreographed local attempt to pull the wool over the eyes of the “comrades from the Center.” The following example hints at the scope of the deception, which – one needs to keep in mind – took place at the height of Anhui’s post-Leap famine: in one danwei on the delegation’s stop-over program, officials had 1,500 staff and dependents (out of altogether 1,800) who showed signs of malnourishment, edema, etc. forcibly relocated well out of sight for the duration.

According to Public Security Construction, the deception of Deng’s delegation was by no means a one-off event. County perception managers had, starting in 1957, already similarly deceived (or sought to deceive) a total of 62 foreign visitors from 17 different countries. In a damning comment, the Central Ministry of Public Security in Beijing made the following observation: “Successive layers of [information] blocking, completely cutting off contact between leaders and masses, creating false appearances, pulling the wool over the eyes of the leaders… The disastrous political repercussions of acts such as these – acts which in some instances were both legally and in party disciplinary terms impermissible – are extremely severe.” Amen to that!