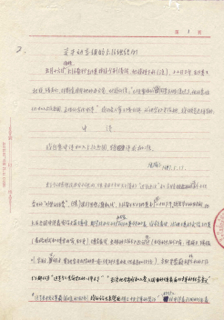 As it moved forward in the aftermath of the Lin Biao incident, China’s Communist Party launched a robust multipronged response to the existential threat posed by the extremist so-called “May 16th” – a vicious cancer that had invaded the Chinese body politic to devastating consequences. In a nationwide campaign to degrade, disrupt, and destroy the staying power of this homegrown network of self-radicalized militants, joint law enforcement and PLA task forces reporting directly to Premier Zhou Enlai eventually managed to reclaim all significant hotbeds of May 16th activity. As part of the campaign, millions of known or suspected at-risk individuals and persons of concern not yet radicalized to the point of extremism were made to attend de-radicalization programs or join counter-radicalization initiatives.

In the late 1970s, concerns were raised regarding practice and compliance deficiencies in the execution of the campaign. Attempts were made at the highest levels of the post-Mao leadership to promote an appropriate portrayal of how it had unfolded on the ground. Then, in the early 1980s, the Party ceased to dwell on the past and decided to look toward the future. Only very limited research has since been done on the “May 16th” – on what it was, what it did, or even on whether or not it had actually ever existed in any organized form in the first place. The present document of the month illustrates the problems that historians are up against. Preserved in a database consolidating information on several individuals attending a 1972 Beijing de-radicalization program and written by a university student at one point co-opted to serve a municipal Revolutionary Committee intelligence entity, it is meant to show what an original May 16th membership application form had looked like. Given that it bears all the hallmarks of a record produced under extreme duress, Tang Xianzheng’s completed application invites any number of contradictory interpretations. I purchased it in a Liulichang antique shop that went out of business in the late 1990s when its premises were demolished to make room for a parking lot.