“欢呼毛选五六卷出版”——广东省佛山市敬制的一枚主席像章
(click on the title to view the document) 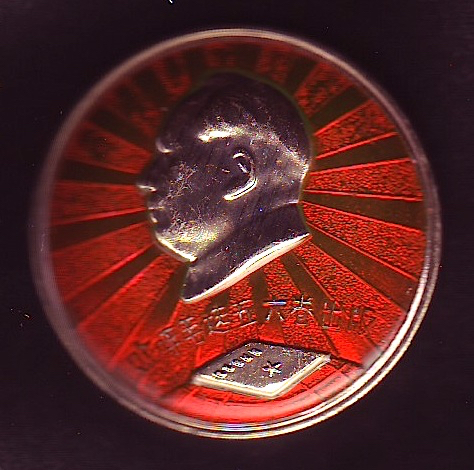 In April 2015, the PRC History Group published a Document of the Month on the production of Mao badges. More recently, badges briefly became the focus of an H-PRC discussion thread otherwise devoted to the Committee of Concerned Asian Scholars. Later this summer, I will be donating my own modest collection of badges (some 2,300 in total, all given to me by friends and acquaintances in Beijing in 1981–1983) to the Kulturen museum of folklore and ethnography here in Lund. But before I do that, I wanted to turn one of my more unusual badges into a Document of the Month. In this case, it is one from 1969 that celebrates the publication of volumes five and six of the Selected Works of Chairman Mao. How is that possible, you may ask, given that no such volumes actually appeared at the time…

In the spring of 1969, the State Council had drawn up an Outline Plan for the 1969 National Economy (Draft) divided into five parts, the first of which dealt with the publication of Mao’s writings and the development of the broadcasting industry. The outline plan clearly stated that preparations were to be made to publish volumes five and six of the Selected Works of Mao Zedong. In the summer of 1969, news of the anticipated publication was spreading and hence the appearance at this time (exact date unknown) in Foshan, Guangdong, of a Mao badge bearing the inscription “Hail the Publication of Volumes Five and Six of the Selected Mao.”

Internal disagreements over content, however, caused a last minute upset. The post-Mao CCP’s version of events has it (ever so predictably!) that Lin Biao and Chen Boda had “plotted behind the back of Chairman Mao” to delete key passages on contradictions and class struggle, while Zhang Chunqiao in turn had “arrogantly come up with all kinds of absurd ideas” disrupting editorial work. As a result, publication was in the end shelved. The State Council’s Plan for the 1970 National Economy as approved by the 2nd plenum of the 9th CCP Central Committee no longer made any provisions for the appearance of additional volumes of the Chairman’s works.

Foshan was not the only place where badges documenting this non-event appeared during the Cultural Revolution. Similar badges from Changsha, Lanzhou, Xuzhou and other places have previously been on offer on the PRC equivalent of eBay.