Stealing Other People’s Mail: the KGB in Beijing (1973) 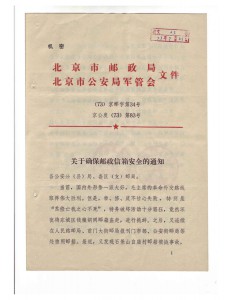 I have chosen this particular Document of the Month because June 2014 marks the first anniversary of Edward Snowden’s revelations showing us how aggressively intelligence agencies seek to gain access to and penetrate our mail. It dates back to the pre-digital age when letters were things we wrote by hand and expected the mailman to deliver. Issued jointly by the Beijing municipal Post Bureau and Bureau of Public Security Military Control Commission in September 1973, its genesis had been a recent successful attempt by Soviet intelligence – presumably the KGB – to gain access “in bulk” to letters posted in Beijing at around the time of the 10th National Congress of the CCP. How? By stealing an entire post office mailbox together with all of its contents. The mailbox had been located in Qianliang Alley, close to the capital’s East City district government offices and not far from the Soviet embassy where, one suspects, it was spirited by car and its contents analyzed. What was the KGB’s intelligence “yield,” if any, from this “brute force penetration” of domestic Chinese communications? That is something historians have no way of knowing…

I found this document, as usual, on one of my Sinological garbology excursions in Beijing in the noughties. Its 1973 level of classification had been “Secret,” meaning in China today that its contents may be made public after twenty years.