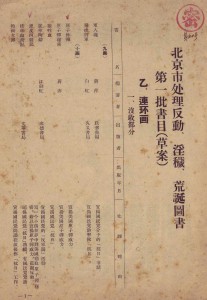 In September 2012, the cadre (a rapper and actor from Lund) in charge of the children and youth sections of the main public library in central Stockholm – the so-called Kulturhuset (文化馆) in Sergel Square – declared that he was removing the 1946 comic series Tintin in the Congo from his library’s reading room. He justified the decision by noting that Hergé’s work promoted racism and expressed an “Afrofobic” and “scurrilous, colonialist view of the world that children are prone to accept uncritically.” He was immediately criticized in the media for having seriously underestimated “the ability of children to think, and to think critically.” In response, he swiftly backtracked and reversed his decision.

In the urban People’s Republic of China, public libraries great and small had been purged of objectionable and politically incorrect comics already in the mid-1950s. The present Document of the Month, probably dating from the winter of 1954, throws some light on what this had entailed: it is a two-part list (a shorter so-called 没收部分 followed by a significantly longer so-called 收换部分) of picture-story books (连环画) that were ordered to be removed from libraries and reading rooms in the capital because of their “reactionary, obscene, or absurd” content. For each individual title, the list gives the names of the author/editor and publisher, the date of publication, and – most importantly – the reason why it was to be removed. The reasons are remarkably diverse and range from “propagating the power of the nuclear bombs of the Americans” to “promoting a decadent life style.” Similar lists were also compiled in other cities across China, their content and scope reflecting local conditions.

This particular Document of the Month was purchased in one of Beijing’s state-run antiquarian bookshops, the 西单中国书店报刊资料部, some years ago. Also acquired at the same time was a similar list of close to 2,000 picture-story book titles banned by the authorities in Wuhan in 1956.