Bo Diddley was right: you can’t judge a book by the cover!

陕西省西乡县样河公社李家沟大队社教工作组汇编的《西乡方言》（1965年)
(click on the title to view the document) 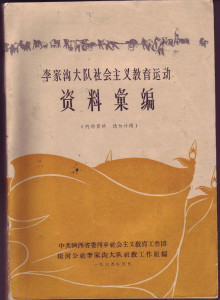 On 18 August 1965, Chicago bluesman Bo Diddley performed Willie Dixon’s “You can’t Judge A Book By The Cover” to screaming fans on the television network ABC’s Shindig. (Two years later to the day, 800,000 ecstatic young Chinese filled Tiananmen Square in Beijing to celebrate, but that’s altogether a different story….) I often think of Diddley – honest I do – when I flip my way through books from the 1963–1966 Socialist Education Movement (SEM) in search of an elusive factoid. What other movement, after all, gave us books with cover titles like《关于组织干部洗手洗澡的几个材料》 that, when you open them, turn out to have no bearing whatsoever on issues of personal hygiene?

Judging from the cover of the 300-page《李家沟大队社教运动资料汇编》 from which I have extracted the Document of the Month for January 2016, it would seem as if here is but another predictable compilation of rural capitalist roader-relevant raw data: household incomes, harvest yields, demographics, gender, chickens stolen, cash misappropriated, suspicious promotions and demotions, self-serving interpretations of national policy, and so on and so forth. Yes, you are probably thinking, such a tome could only be of interest to hardcore Shaanxi SEM historians. Which is where you are wrong. Because, the SEM was not a campaign that saw CCP work teams enter rural People’s Communes solely to “do politics.” In this case, the 39 men and women who made up the Lijiagou work team included a teacher and four students from Beijing Normal University who promptly embarked on some alternative fieldwork of their own. Our Document of the Month is one product of their hard work: a quasi-ethnolinguistic survey of the Xixiang dialect! Who would have thought that, tucked away on pages 259–65 in the back of a book documenting the SEM there is this little gem for historians of localized speech communities and vocabulary? Also in the same book (its full table of contents can be found here) and proving Bo Diddley right are pages upon pages dealing with local Xixiang sayings, proverbs, aphorisms, and popular metaphors, the latter thankfully with explanatory matter attached. In short, an unforseen Sinological treat!