Earlier, everything was better. The earlier the better.

(click on the title above to view the document) 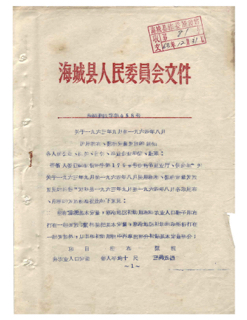 Another new year. It is quite common these days to hear people speak of how life was a lot better half a century ago. Swedes may only have had a single television channel that offered no freedom of choice as far as weather forecasts were concerned, but at least programming was never interrupted by advertising. American music was definitely better: remember Pharoah Sanders’ Preview? And though few of us realized it at the time, all our telephones already came with built-in GPS: you always knew where your friends were when they picked up, and you never had to start a conversation by asking “Where are you?” But admittedly, a lot of the time (while it was still the present) the past was pretty gloomy, not to say grim. Which brings me to China and the January 2015 Document of the Month.

An official 1963 circular (purchased on Kongfz.com a couple of months ago), it originates with the authorities in Haicheng, a well-to-do county straddling the trunk line between Shenyang and Dalian. In 2010, Haicheng ranked as one of the “中国十大最具幸福感城市” and, who knows, collective memory may well have helped it achieve this feat. Older residents were still in a position to compare life in the here-and-now with living in Mao’s China at the best of times – like, for example, when the Three Bad Years were over but the Ten Years of Domestic Turmoil had not yet begun. The circular concerns rationing and as such it illustrates what would have been their everyday lives as children or young men and women. The good old days? You must be kidding…