An affair to remember? Consenting adults in the Sun Yat-sen Memorial Park 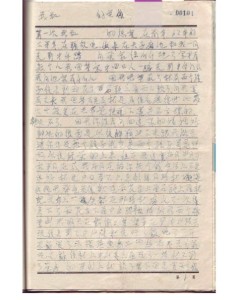 Let’s call him Mr. Yin. The place: Nanjing. The year: 1964. Yin – a widower with children, born in 1915 – is a cook. His employer, the Nanjing No. 2 Construction Company, is in the midst of the Socialist Education Movement (SEM) (targeting graft and embezzlement, speculation and profiteering, extravagance and waste, decentralism, and bureaucracy) and is building a case against him. He is an easy target. In the grim years of the Great Leap Forward, he had more than once exploited his position as a cook. He did things he should not have done. A dose of socialist education is just what he needs, so the reasoning goes, and now he gets it: by the time the SEM winds down, his file contains well over a hundred individual depositions, charges, allegations, accusations, letters of denunciation, and whatnot. Some are nasty, others understanding. In exchange for sex, Yin supplied the wife of a construction worker on Pearl River Road with “beansprouts and other vegetables,” one worker charges. But he goes on to add “The leadership has to really help [Yin]. He has many issues. Please Secretary Han, he needs your help!”

One of the depositions in Yin’s file concerns a brief affair he (admits to having) had in the winter of 1962–63 with a woman from a rural People’s Commune on the outskirts of Nanjing. In her deposition, the woman tells of what happened as she remembers it. The present Document of the Month is my transcript of her handwritten text. I have allowed myself to correct her mistaken characters and improve on her erratic punctuation, but aside from that, I have made no other editorial changes other than anonymization. You may ask why bother to make this a Document of the Month, and my answer is because of its value to students of social history: surely there can’t be that many other first-person accounts around any longer, from Mao’s China, of semi-illiterate rural women remembering when first “he invited me out for dinner” and then how “one thing led to another…”!