西南局公安部1950年7月编印的业务参考材料之六：《文书检查》
(click on the title above to view the document) 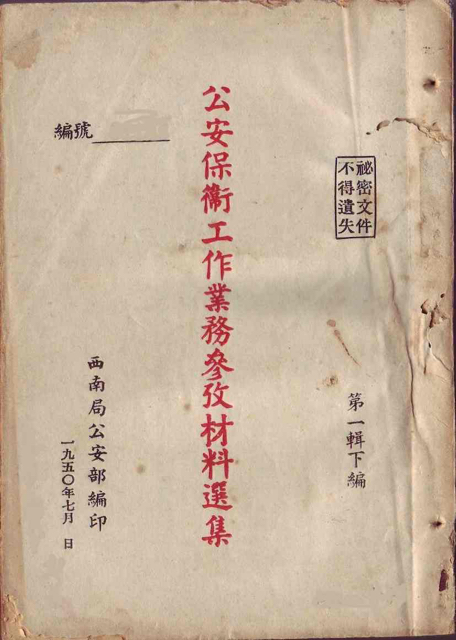 Serious students of history will no doubt be familiar with a series of lectures by 梁启超 originally published under a different title but today known as the《古书真伪常识》.

The present Document of the Month started out as a lecture in a similar vein, albeit not by one of Chinese historiography’s giants but by an anonymous forensic scientist. I have copied it from a brittle (its spine would not survive photo-copying) and bookworm-damaged book of vocational reference texts produced by the Southwest China regional Ministry of Public Security in 1950 and what it explains are the basics of how to detect document forgery. Hinted at are the kind of practical skills put to good use, for example, by the officers who in the winter of 1954 exposed 李万铭, the real-life impostor immortalized as 栗晚成 in Lao She’s comic play《西望长安》. Originally, the anonymous lecturer author’s ratified audience would have excluded independent academics, but sixty-five years later his/her brief, quaint, hands-on text surely merits inclusion on any supplementary reading list for method courses designed to meet the needs of PRC historians.