Christmas in Nanjing 1970: If you see something, comrades, say something!

南京坚强皮革厂革委会政工组的五份“口述材料”
(click on the title above to view the document) 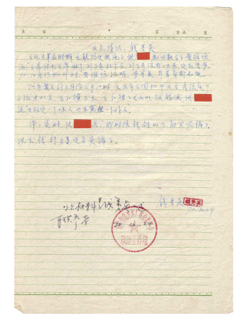 In 1970, to support the unfolding of a “Unite to Win Still Greater Victories” public awareness campaign, the Communist Party released public service announcements and outreach materials encouraging citizens to contact local law enforcement when they witnessed suspicious activity. “Unite to Win Still Greater Victories” was a simple and effective program to raise public awareness of indicators of counterrevolution and counterrevolution-related crime, and to emphasize the importance of reporting suspicious activity to the authorities. The program underscored the concept that an alert public has a critical role to play in keeping revolutionary society safe.

This month’s PRC History Group Document of the Month comprises five original “suspicious activity statements” volunteered by concerned members of the public to a factory floor security officer in Nanjing on Christmas Eve 1970. The “Nanjing Five,” as they never became known, felt it was their civic duty to say something about the anomalous activities of one Zhang XX, a fifty-year old individual in the Staunch Leather Factory where they all worked. Their lead narrative listed numerous instances of Zhang acting furtively and suspiciously, and they provided detailed, credible, and reliable intelligence showing that Zhang on repeated occasions had provided material assistance to known “four-kinds-of-elements” (四类分子).

The five reports on Zhang XX were deposited by her employer in a tiered storage environment, in what today is known in Europe and North America as a “screening database.” In China, already half a century ago, such databases fused identity attributes (e.g. biometrical, biographical, behavioral, and reputational details), community of interest data, and other information on individuals to provide comprehensive and convenient “one-stop shopping” for authorized Communist Party users tasked with detecting, mitigating, or preventing counterrevolution.

The source of this Document of the Month is a Nanjing flea market, where it was purchased in the late 1990s by a Swedish liuxuesheng.