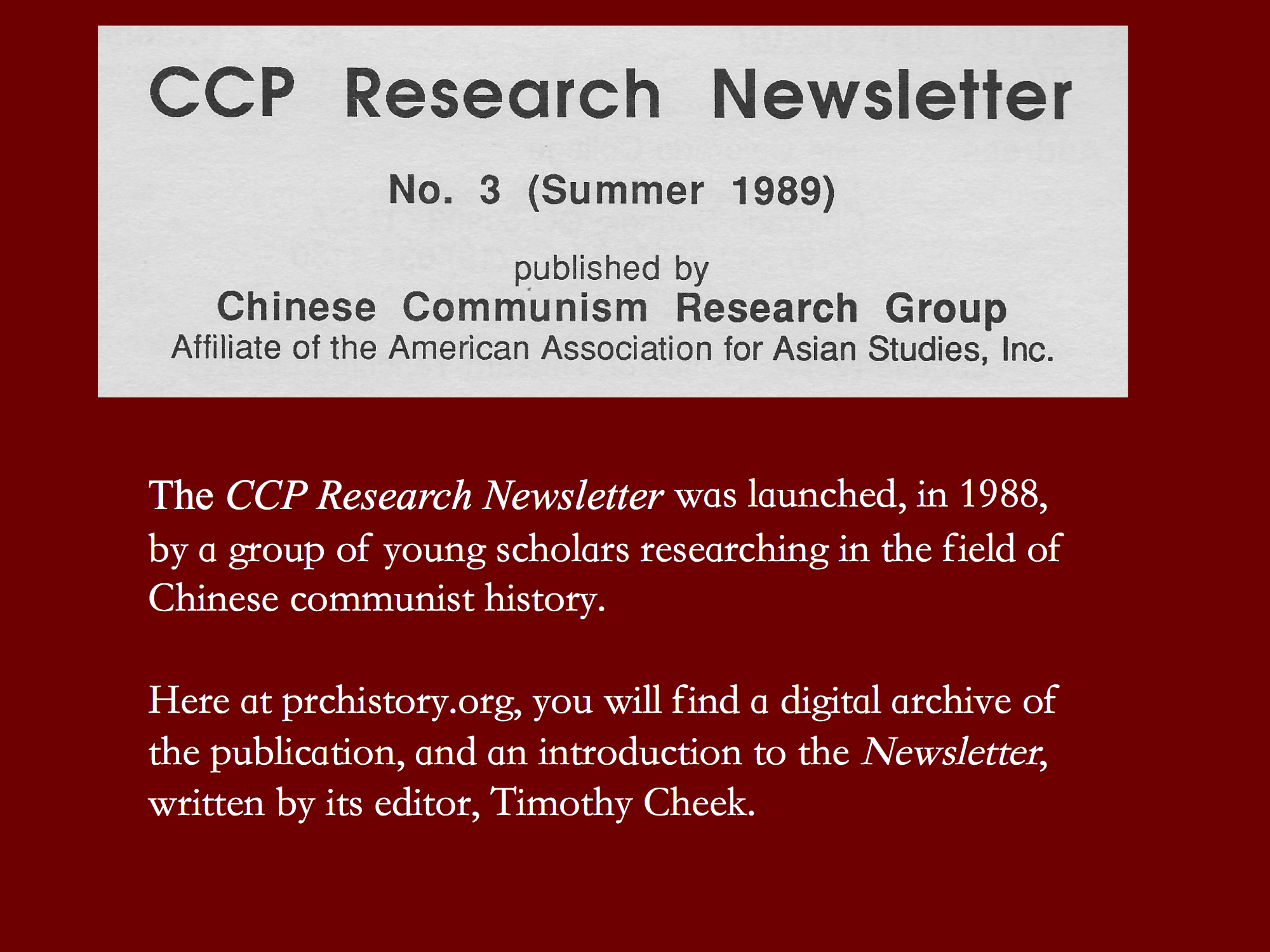 In the spring of 1988 a group of young scholars working on contemporary China banded together to produce a newsletter to capture the new world of researching Chinese politics and political history that had emerged in the 1980s. That fall, Issue No. 1 of the CCP Research Newsletter appeared with the opening invitation:

The Invitation outlined the scope (from the 1920s to the present) of what it intended to publish (not research articles but “information about where to find sources, how to assess them, and how to interpret them”), and announced the hope that it would become a focus for an international community of scholars. The editors closed with an invitation for scholars to add their names to a directory and declared the goal of facilitating “the fair exchange of materials difficult to locate” (especially the hot items of the day, neibu circulation books) by encouraging scholars to send their recent “finds” to CCRM—the microfilm service run by the Center for Chinese Research Materials in Oakton, Virginia.

The “Chinese Communism Research Group” soon registered as an affiliated organization with the Association for Asian Studies (AAS) in the United States and held regular open editorial board meetings at the AAS’s annual meetings from 1989 to 1993. It ceased publication with Issues Nos. 10 – 11 (Spring – Fall 1992), printed in July 1993.

It was a wonderful network of scholars keen to make the best of the “new historiographical moment” of research on post-Mao China. The moving forces were Tony Saich, Michael Schoenhals, Hans van de Ven and myself, but scholarly friendships and shameless invitations rendered the project productive. The range of contributions was exciting and showed the maturation of documentary studies of contemporary China before the opening of archives to many foreign scholars. Most of the substantial reports assessed newly available neibu circulation materials, such as the massive documentary collection《中共中央文件选集》(1982) [an open or gongkai version has since been published), 王建英’s internal reference listing of CCP organizational history 《中国共产党组织史资料汇编》(1983), and a bibliography of neibu publications《全国内部发行图书总目 1949-1986》(1988),  as well as dozens of similar handbooks, guides, and statistical compilations not publicly available (via short notes). Tony Saich offered a broad survey on newly available sources on pre-49 CCP history and Zhang Zhuhong (Peking University) offered his musings on Party historiography.

Publically available materials were similarly assessed, as in Joshua Fogel “Mendacity and Veracity in Recent Communist Memoir Literature,” Hans van de Ven on newly available full runs of the CCP’s journal from the 1920s, 《黨報》, and recent publications of Mao works in Japan and China. Collections and reports of trends came in from Moscow, Tokyo, and Heidelberg. A research directory of some 150 scholars and a dozen institutes and centers was published in Issue No. 4 (Winter 1989 – 1990).

What was on our minds? In addition to the obvious commitment to careful scholarship and sharing of materials, there were less public motivations driving this project. I can only speak for myself, but I implicate Michael Schoenhals and Hans van de Ven. The Newsletter was born at the Fairbank Center in the halcyon days of Roderick MacFarquhar and Merle Goldman, but it was a project created by recent PhDs who moved through that busy research center.  Hans and I bemoaned all the source criticisms and documentary assessments that were being cut out of our first article submissions. We found a kindred spirit in Michael Schoenhals, then Tony Saich, then David Kelly who came in from Australia on a Fulbright. We used the technologies available to us in the 1980s— before cell phones and the Internet. For me, I wanted to extend the careful documentary scholarship that Philip Kuhn had taught us in his approach to Qing history to the history of the CCP.

There was a second unstated but key function of the Newsletter, that is, to “launder” neibu materials. It was a fact of life during the first decade of the post-Mao period that the best research materials we could find in China were neibu collections of materials and studies not polished to the requirements for public dissemination. Such materials were officially out of bounds for foreigners and were frequently confiscated by Chinese customs. Most of us were able to obtain only a few precious volumes related to our research topics after considerable time, effort, and guanxi. The problem was: if we used these generally unavailable materials in our published research, we feared our providers in China could be traced, since so few foreign research students were in China at that time and police surveillance was moderately thorough. How to get these materials into the international public domain without exposing individuals to retribution? Harvard came to the rescue. We hit upon the idea of announcing that all materials covered in the Newsletter would be available at the Fairbank Center Library or through CCRM. We worked on the following assumption: China would value the prestige of Harvard too much to punish the institution. It worked: we established the expectation that materials should be shared (albeit after due time for the “finder” to have a first crack at them), made them more widely known with critical introductions, and to the best of our knowledge nobody in China was implicated.

The Newsletter ran some four years and produced nine separate editions (with Nos. 6 & 7 and Nos. 10 & 11 as “double issues) with print dates between October 1988 and July 1993. But from the very beginning we encountered production problems. The Chinese characters were execrable—the ugliest and most ungainly computer-generated characters you can imagine. They were nearly impossible to format. In fact, we gave up and reverted to pinyin from Issue No. 9. The entire production was carried out on a 1986 Mac and a new-fangled laser printer. Mail was slow, and labor was interrupted by teaching, grading, and other commitments. Despite our joint efforts, and to some degree reflecting the post-Tiananmen malaise, in about 1993 we accepted the fact that we could no longer maintain the effort. Lesson: better funding and a more professional production staff would be necessary.

Nevertheless, many of the articles and essays in the Newsletter are of enduring value. Indeed, a selection was included in the “Sources and Methods” section of New Perspectives on State Socialism in China (Armonk, NY: M.E. Sharpe, 1997), pp. 323 – 396.

We are grateful to Matthew Johnson and Aminda Smith and the PRC History Group for supporting the creation of this free and open digital archive.