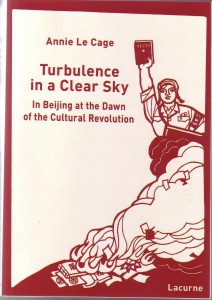 In April 1965, a young diplomat on her first overseas posting arrives in Beijing. She will spend the next two years living in the Beijing Hotel while working in the political section of the newly built French embassy in Sanlitun. She keeps a diary which, its contents unchanged, is published to mark the fiftieth anniversary of the establishment of diplomatic relations between France and the PRC. Now also available in English translation, Turbulence in a Clear Sky: In Beijing at the Dawn of the Cultural Revolution by Annie Le Cage may have little commercial appeal, but it is an evocative day-by-day record exuding empathy and unmistakably French charm. Anyone interested in Beijing on the eve of the Cultural Revolution or simply eager to develop a “feel” for what a junior diplomat’s life in revolutionary China was like in a now bygone era should obtain a copy. As a teaser of sorts, I reproduce a few of my personal favorites from among Ms. Le Cage’s diary entries below.

I had been contemplating making something very different the Document of the Month for August 2014 when Turbulence arrived unsolicited in my mailbox, together with a press release from its publisher Lacurne specializing in memoirs and travel writing. Given that it is a diary and hence definitely a primary source “document,” I decided to alter my original plan. The French original is available here and the full English-language translation here.

On leaving the hotel dining-room I meet a Canadian communist, a Marxist-Leninist-Maoist. We had a brief conversation three days ago. I was waiting for a taxi and he was waiting for his guide and his interpreter. I’d have recognized an American anywhere else, but his presence here was surprising. He had been invited by China, as a friend of China. And what a warm welcome! At the airport, little girls of eight, like his own daughter, gave him flowers, etc. “What do you do in Beijing when you want to have fun?” It was such a good chance that I couldn’t resist seizing it. “In Beijing you don’t have fun. You read the works of Mao.” He was slightly taken aback, but he laughed. Who knows what he’ll tell them all when he gets back to Vancouver. Will he be brave enough to temper his enthusiastic judgment by a few remarks on the boring side of communism?

Spy-mania doesn’t seem to be very serious in Beijing, or at least I don’t suffer from it at all. It’s possible we’re being watched, but we’re unaware of it. The reception desk at the Beijing Hotel, and the guards’ office at the embassy probably know about our comings and goings and record them. So do the concierges in Paris. Our letters are opened. Too bad! They were when I was at boarding school. I can’t see how our accounts of personal and family affairs could possibly be interesting. As for the phone-tapping, microphones and so on which make up the equipment of a little James Bond, it would never occur to me to wonder whether or not they exist. Spy-mania was and still is doubtless more noticeable in Moscow. I feel as free here as anywhere else. The most wearisome thing, apart from being cut off from Chinese life and the almost total lack of natural and normal contact, is the limited circle of foreigners in which you go round and round. But I’ve discovered you can be alone if you really want to be. And China teaches a certain detachment. What’s the use of being irritated by something you can’t change! The “passivity” of the Chinese could be a lesson to us.

A rally at the [Beijing Workers’] stadium again.

Posters on the walls of the city still. Liu Shaoqi’s daughter is accusing her mother of not having “reformed her capitalist conception of the world nor her inordinate pride”.

And parallel to that, the kindness of one of the most amiable peoples in the world. It’s half past nine in the evening. I’ve just driven some guests back to Sanlitun, the embassy quarter, and I’m going along Chang’an, the main avenue in the city. Between the station and the [Beijing] hotel I have a puncture. I could leave my car there and walk back, it’s straight on, but it would take at least half an hour. I can’t see myself changing a wheel all alone in this cold. I’m also half an hour’s walk from one of the diplomatic compounds, where Patrick and Anne live. As I’m getting out of my car in what looks like an empty avenue, a Chinese comes up to me and offers to take me somewhere where I can make a telephone call. Nearby there’s a little hut where bus drivers bring their books, rest and drink tea. Everyone I call is either out or in bed with flu. Seeing I’m in difficulty the people there ask me several questions about the car to find out whether I’ve got everything I need. Four of them come and help me change the wheel. They can’t get the jack to work, so to lift the car they stop some soldiers who appear all of a sudden. All this is done in an atmosphere of extreme kindness which I appreciate all the more since it’s bitterly cold and the avenue is very poorly lit.

One of my good “Chinese” moments in China.

On the way back, two little Red Guards, doubtless tired of their little Long March to Beijing, stop the car. They were hitching a lift with a torch. They get in immediately. I was expecting a reaction of surprise or hesitation on seeing foreigners. They are well-equipped, but its’ so cold. They look no more than twelve. They say fourteen. Four or five times over other groups signal to us, and the other lorries we meet or overtake don’t appear to stop. Hasn’t it been “suggested” that the Red Guards and revolutionary students should go home now? However, large numbers of them have been in Beijing once more during this last week.

The little Red Guards didn’t go to sleep in the car during the sixty kilometers to Beijing. In theory they take two days to go from Tianjin to Beijing (120 kilometers). In theory. Perhaps.

I dropped them off at Tian’anmen. One had been to Beijing before. The other gazed in wonder.

Strips of paper have once more been stuck on the French window. Today the wind seems to be lessening.

A drive around the city. I want to see if anything has changed near the Lama Temple or in the pretty street bordering the Temple of Confucius. Everything was as it was.

A good day. I’ve received a dozen letters. It must be very hard to imagine what the Cultural Revolution is like by reading the newspapers. You don’t realize that the mass rallies are confined to certain districts. When the demonstrations were going on outside the embassy, all was calm three or four streets away. So if you avoid the places where there’s trouble, traffic is normal. Except when huge rallies are held on Tian’anmen Square, but they stopped in December.